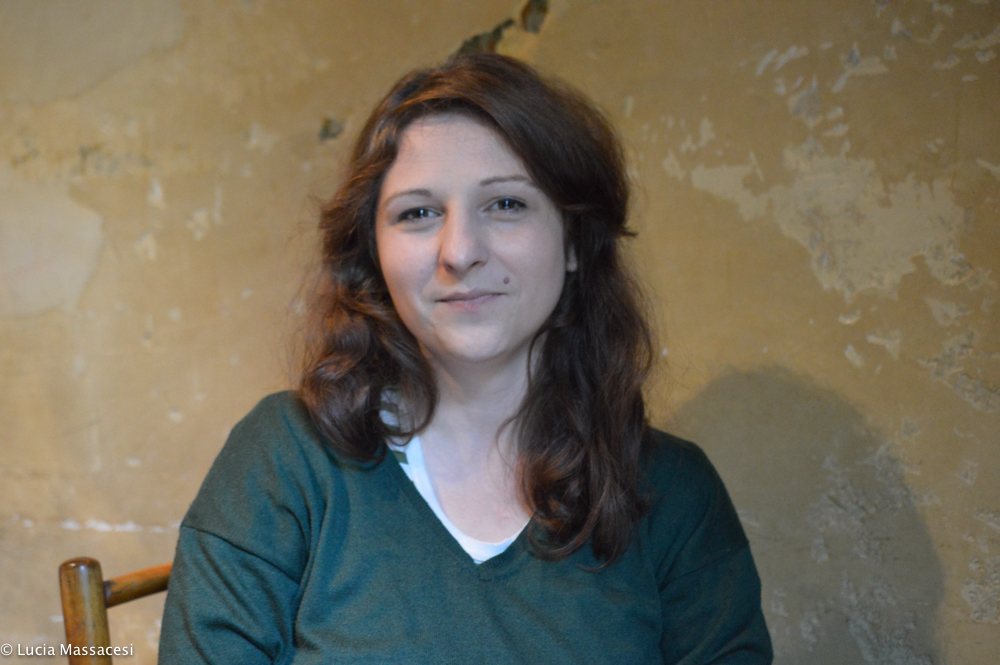 Goats are among the first animals domesticated by humans. In the Neolithic, shepherds began to keep goats for milk and meat, but over time people have discovered that they can also be used as fuel, clothing, construction and instruments. The goat is called “the poor man’s cow.” Because it’s cheap and good.

I meet Catincă Drăgănescu in a June rainy day at Dianei 4. Like it often happens in Romania, places echo back to other stories, developing their secret connections. Now these shanty chic quiet rooms host a hipster venue, back in Ceaușescu’s days, some Securitate premises. At a given time, they also served as collecting point for Romanian jews in wait for their final relocation to Israel, which could only apply once their diversified “ramsons” were negotiated with Romanian government agents. Today Catincă’s playwright ROVEGAN  gives voice to a contemporary variation of the same dilemma:  the impact of economic migrations on human destinies. Catincă wrote ROVEGAN in 2015 as her Residency project at the Drama League, New York, the first Romanian to be admitted there. We order our cappuccinos.

I had experienced ROVEGAN few days before at Centrul Educațional Replika in Bucharest. The last but one show with no certainty yet that it would run on again in the fall season, it is a piece of brechtian “epic theatre”.

The performance lasts for an hour and a half and flows at a high emotional pace. I believe that any signora italiana, if not any Italian citizen, should “experience” this piéce. Set design is basic: three chairs and a background photo frame featuring a dusty road reaching out into the Moldavian steppe, the only anthropic element being a Bine aţi venit la Vaslui/ ‘Welcome to Vaslui’ road sign.

Acting is all on three outstanding actresses, Mihaela Teleoacă, Valentina Zaharia and Silvana Negruţiu: they alternate to create a gallery of characters as well as to give voice to the chorus. Each scene is introduced by an estranging musical track – one for all, the sagacious manipulation of Felicità by Albano e Romina (thank you, Alexei Țurcan, for twisting that song to its utmost grotesque possibilities).

And, under a badante‘s eyes, what an alienating place Italy may become. Scene after scene, the picture sharpens more and more, with Italiani brava gente/ ‘Italians good people’ inflicting (unawares?) hardship on a silent army of Romanian and Moldavian badanti. Here, the term badante needs analysing a bit. The Italian Treccani Dictionary dismisses  it as “A person without special qualifications, who cares for the elderly, the sick or the not self-sufficient”, real life defines a badante as a supporting column in the Italian contemporary society. She is the person who daily accesses our houses to take care of our old, disabled or little ones, often 24/7, allowing us to pursue our professional or personal goals. It does come with a cost on both sides, but we rarely seem to stop to consider what these persons had to leave behind: they remain an invisible army to us.

Entrance to the show is for free but on reservation basis, so to observe those attending does prove an exercise in behavioural sociology. Fact is, the phenomenon of badanti is a sensitive topic in the Romanian society. It is perceived as a taboo by a vast majority as it triggers sense of shame, guilt or frustration. To my surprise, though, people showing up to attend the performance were quite heterogeneous and, along with the expected ones – young engagé, mostly female – I could spot a considerable number of common middle-aged citizens. Personally, I bear my own burden, involved as I was in “the Italian side” of the phenomenon.

As a whole, though, what a different human gallery I found at Centrul Replika, from the attendees observed just a week before at Bucharest Teatru National for Durenmatt’s The Visit. There, prestigious location, dress code and the related importance of being seen, informed me that power was in the air. Here, Radu Apostol, one of the Centre organisers, explained to me that their performances can go on only thanks to voluntary work, strong social commitment and networking, relying on hardly any public funding. Against all odds, though, their program goes on, their mission being to keep on providing the community with a place where crucial topical issues may be addressed.

“Theatre of Power – i.e. the cultural industry with its link to the political apparatus -, vs Theatre of Ideas, with its lively offer of independent projects that can rarely benefit from public funding and mostly rely on alternative fundraising channels”,  Catincă would later explain to me, adding up:”If you want to survive, you cannot be only a pure playwright, you must become also the manager of your own project”. Catincă is still very young but she seems to already possess all the necessary managerial competences, with also a degree in Media Communication. I cannot but be struck by her focus on her art and clarity of vision as cultural organiser.

ROVEGAN is the first playwright in a trilogy on immigration to bring the badanti issue on stage in Romania. The immediate source of inspiration for her project was Cireșe amare / Bitter Cherries, a novel by Liliana Nechita, a former badante from Moldova herself. In fact, while migration is becoming a key issue among young Romanian intellectuals and a documentary film already exists, Catincă wishes to underline that her focus is on the artistic representation rather than on the social investigation: “ROVEGAN is no documentary as it aims at creating its own world, detached from any real circumstances.”

Produced by Asociaţia ARENA, between February and June 2017, ROVEGAN  went on tour all across Romania, with free performances followed by an open  debate: Bucharest, Cluj, Craiova, Iasi, Botosani, Sibiu, Targu Mures and Sfantu Gheorghe. “We found very different kind of spectators. In the smallest centres, like Botosani, Targu Mures and Sfantu Gheorghe, we had very emotional feedbacks, with many women taking it all on a very personal level; at the other end of the spectrum, we found Bucharest audience, with a much more detached cultural approach.

The Epic of Mother Goat

“The idea to use a fairy tale to develop my project came to me while listening, one Saturday morning, a reading of Capra cu trei iezi / ‘The Goat with three kids’ on a children radio program: what an epiphany!” Disseminated with the Romanian curriculum, Creangă’s tale was written in 1875. Since then it has proved one of the best-known works in local children’s literature, also becoming the topic of several music, theater and film adaptations, in both Romania and Moldova. The tale illustrates the notion of motherly love.

As Catincă elaborated her vision, a piéce of epic theatre began to take shape. “Mother goat is Mioara, a 47-old single mother from a Moldavian village. Forced by extreme poverty to go to Italy to work as a badantă, she must leave behind her two little kids and her very old mother.”

So it is that on this popular background the action in ROVEGAN is built. The script goes on at a steady pace, exploiting at its best the register of the fairy tale and the imagery of the goat ecosystem. Mihaela plays Mioara, while Valentina and Silvana make their voices sound like bleating, other moments one of them uses a neutral tone to illustrate some behavioural habits of the Carpathian Goat.

That is how, then, the imagery of the goat and the re-elaboration of traditional nursery rhymes, help Catincă to describe “the mixed feelings hundreds of thousands of Romanian and Moldavian economic migrants experience, torn as they happen to be between traditional role models of ‘self-sacrificing mothers’ and pressing new needs of self-empowerment and gender awareness.”

About the term badantă: it is worth noting that, while its Italian version is officially used in all communications of the Italian State with reference to migration and work permit policies, the Romanian word has not appeared yet in the DEX (Dicționarul Explicativ al Limbii Române).

The final scene won’t be spoiled, I just borrow a conclusion from a Romanian review (which I cannot track back, help me please if anyone can): “Mioara’s story brought on stage by Catincă and her team, is just one of the hundreds of thousands and this is why this shown must be seen: a phenomenon that takes place in our contemporary world and, more specifically, within the Romanian society. It helps to understand more clearly  the deep tear that is been perceived more and more in recent years between those who take to the streets to resist and protest and those who seem passive and careless. They are those who most suffer from extreme poverty and lack of education in the rural areas of the country – thousands of Romanians forced to migrate in search of work opportunities, with all the consequences that such a decision causes in their lives and in their relatives’, as well as in the Romanian society as a whole. Therefore, go and see ROVEGAN, because if it were a smart, funny and well played show that touches socials issues without provoking any in-depth reflection, it would have already been awarded on top of a podium.”

When I leave Catincă I wish her good luck and, above all, promise to follow up soon with my article. I did prove a liar, as only now, October 2017,  I have been able to keep my promise. A couple of good reasons are on my side, though. First one, I was sure that ROVEGAN would go on in the fall season and so would benefit more from any new review coming up NOW, rather than as a tail of the old season. Second and last one, because a recent relocation to Kiev, Ukraine, has made all offline engagements prevailing and rather time-absorbing. Truth is, Catincă Drăgănescu did not need my review at all as she keeps on reaping wider and wider well-deserved success, season after season. Good luck to such a promising young artist.