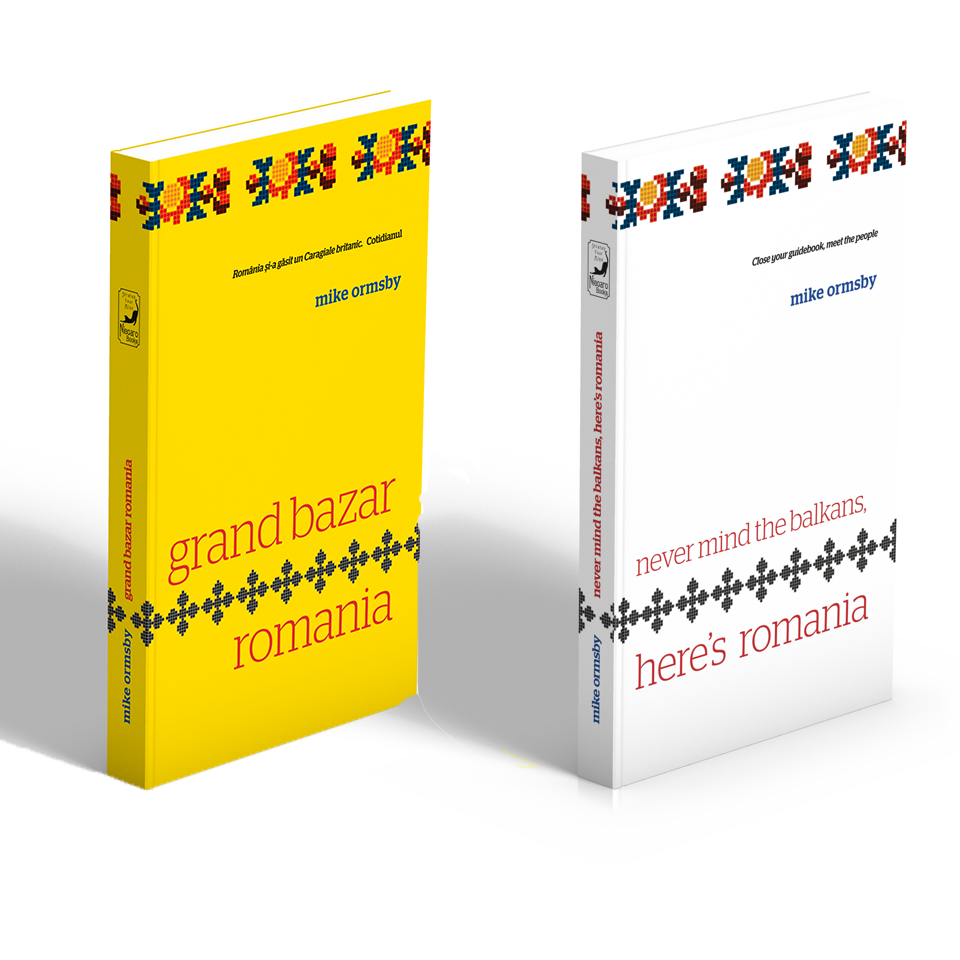 Admittedly, it has taken me some time to discover Never Mind the Balkans, Here’s Romania, first published in 2008, yet here I am now, eager to fill that awkward gap.

In this collection of fifty-seven short stories, Mike Ormsby, a writer and former BBC journalist/World Service trainer, chronicles various moments of his experiences in Romania between 1994 and 2006, when Romania became his home.

Published simultaneously in Romanian as Grand Bazar Romania (translated by Vlad A. Arghir), Ormsby’s book received a range of reactions – from sheer enthusiasm to harsh criticism – mostly depending on readers’ personal visions, expectations, and sometimes, on their nationality.

Personally, I could not help getting absorbed in tales that so vividly evoke situations and characters almost identical to those I have come across, eight years later.

Irony – and, even more valuable, self-deprecating irony – seems to me the X-factor which makes you enjoy reading this book, to the point that some local critics have dubbed Ormsby ‘our British Caragiale’, after the 19th century playwright and satirist. Alas, I wish I knew more about Caragiale – just another one of the huge gaps I still need to fill – to fully appreciate that comment, surely enough, though, the author’s funny and bittersweet tone works as an antidote to his keen empathy with Romanians and their unique land, providing him with a safe distance from which to observe the scene.

Indeed, Never Mind the Balkans is not the only book about contemporary Romania under “modern foreign eyes”, so to say, and I will be dealing with at least a couple of others soon enough: Philip O’Ceallaigh’s Notes From a Turkish Whorehouse  (Insemnari dintr-un bordel turcesc, translated by Ana-Maria Lisman), and Voyage en Roumanie by Alain Kerjean; each contribute in their own way to unveil some of the deep mechanisms at work inside contemporary Romanian society.

Back to Ormsby’s book, it strikes me for having succeeded in assembling such a vivid gallery of characters, so powerfully close to the “real thing”: you cannot but feel grateful for that. In each story, the author blends into his surrounding and allows characters to speak for themselves. His voice is never invasive nor in the least sounding like the usual “wise guy from the West”. Rather, quite often he limits himself to acting as litmus paper within his environment, letting people and situations speak for themselves. Like in Why Not, where his artistic projects with his friend Adrian finally cannot but crash when faced with the dumb indifference of an incompetent journalist, whereas in Nice Sofa, Ormsby lucidly stops aside to actually wonder, “Was it my fault? Was I some wise guy from the West, with big ideas?” So, as I went on reading – always with valuable help from my Urban Dictionary – I enjoyed descriptions conjuring up, in a bunch of words, whole human landscapes and situations.

More. Many tales leave you with a surreal aftertaste, not an infrequent impression in Romania. Take Labyrinth, where characters successfully incarnate one mainstream approach to life here: “Live by the rules and don’t get stressed.” Others – with generous help from serendipity – focus on the past or dig into local history to finally present you with little treasures, like Buried, where, en passant, Mihai Eminescu is described as that chap “with the rock-star looks”. The tale sheds light on the little known, tragic biography of a promising young translator, Corneliu Popescu, whom Ormsby discovers by chance while searching in the public library for English translations of Romanian authors. As a teenager, Popescu translated Eminescu, and brilliantly so, but died alongside his mother in the 1977 earthquake.

Another kind of sadness takes you when reading tales like Șpaga, depicting the use of bribes as the mainstream strategy to solve any practical problem or life issue, applicable at every possible social level.

The good thing about these tales is that they are not Bucharest-centred: Ormsby travels the whole country and encounters very different human habitats. In The Wrong Place, we end up in a small village, Tușnad, with poor Tanti Dorina who is caught in her damp bed between past and future, whereas in Too Good To Be True, a hiking trip takes us up into the Carpathian Mountains, dangerously close to angry sheepdogs. But it is definitely in tales like Faith, Hope, and Chablis that I most appreciate Ormsby’s voice. Here, two worlds – West and East Europe (allow me to generalise) appear to get extremely close one another, yet something goes wrong and it does smack of us-and-them – indeed a chasm – unless prejudice and self assurance are not won by good will and a sincere wish to understand “the other”. I won’t say more, because I do invite you to pick up this book and enjoy your reading.

Overall, I am grateful to Ormsby and will steal a quote from John Lennon, one which the author passes on to his friend George, a character we meet in several tales: “Life is what happens while you are making other plans.”