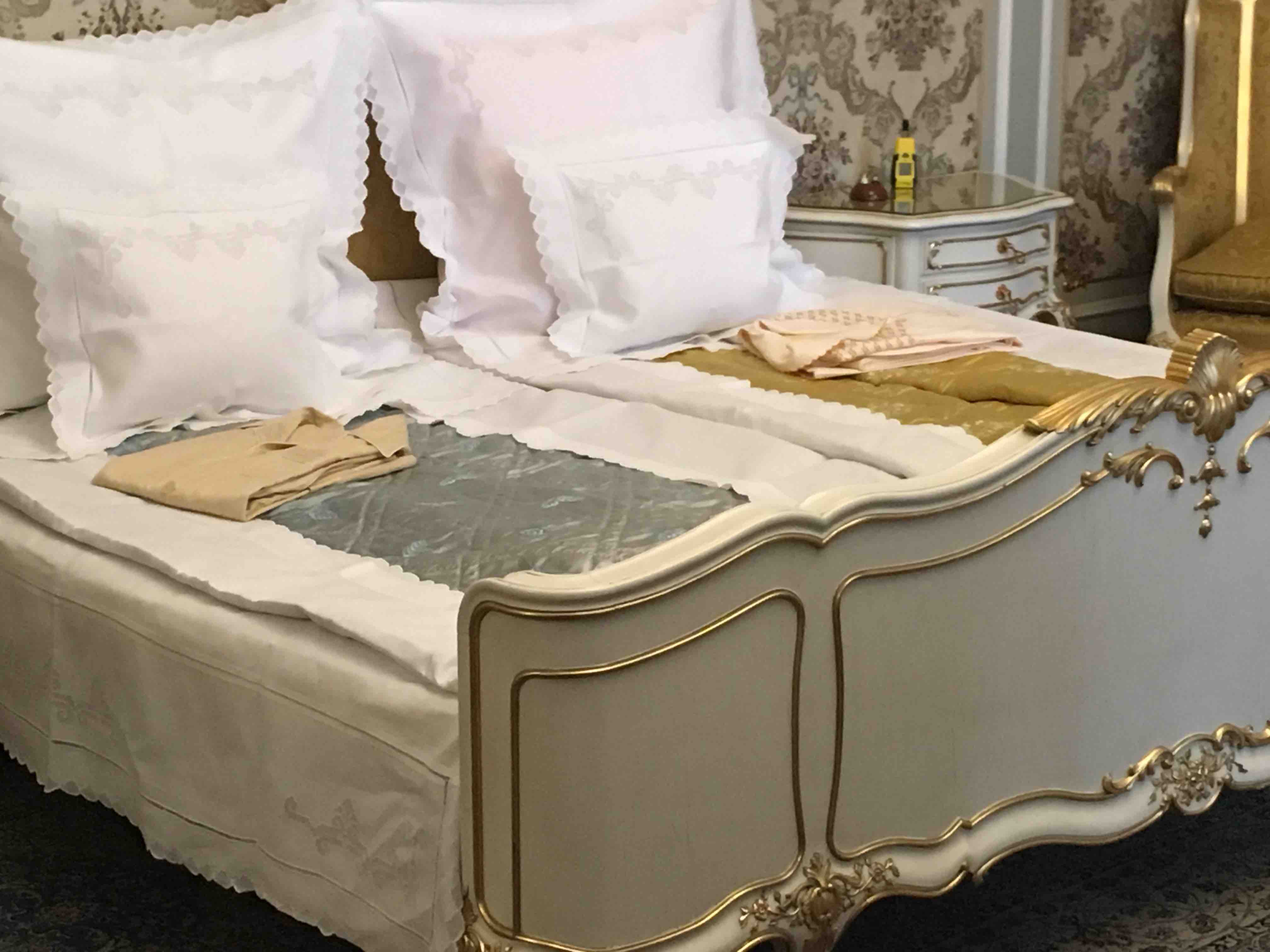 I have recently had the opportunity to visit two highly symbolic scenes of the Romanian past finally open to public view. There I could take my fair share of snapshots but more than that ordinary booty, I came back home with the feeling that I had added two crucial pieces to my Romanian puzzle. This kind of connect-the-dots game has taken me first to Palatul Primaverii in Bucharest and then to the Muzeul Comunismului in Târgoviște, a town 80 kilometers (50 miles) northwest of the capital.

The Primaverii (Spring) Palace opened its doors for the first time in March 12th, twenty-six years after the fall of the regime. It is the place where the Ceaușescus – Nicolae, Elena Ceaușescu and their offspring, Valentin (the only survivor of them all, living away from the limelight), Zoia and Nicu –  had resided since the mid-60s to the very last days of December 1989.

Ten o’clock Saturday morning on March 19th, an official guide takes us – about fifteen visitors – through the Palace rooms. The tour, for the time being, is only available in Romanian. The guide is a young tall chap wearing a dark suit and looking on us with a disquietingly android look.  He seems programmed to flood us with information on irrelevant details about precious alabaster vases, Murano chandeliers, tapestry, indeed any single piece of decoration, furniture, artwork, steering well away from any form of historical information. Maybe the historical narrative is given for granted, as all my fellow visitors are locals: they are supposed to know the whole story already, no matter if among us there are also few millennials who had not even been born yet in 1989, someone must have told them something somehow.

I really value the opportunity to roam this 80-room residence, which includes a cinema, a monumental swimming pool and an impressive dressing room, together with Romanian citizens. Through their very eyes I can experience the unveiling of a location kept hidden from them for so long and about which so much has been said and written about: the stories within the story.

While we all keep on taking our pictures (“no flash, please!”) as freely as we wish, it does sound as a reversal of fortune of kind, considered that this has been the very place where lack of freedom had been theorized and in a way emanated, maybe – allow me this flight of fancy -, after being pondered upon in the course of a chess game or the projection of a movie in the cinema room downstairs. All along the tour, as the opulent details in Nicolae’s, Elena’s, Zoia’s, Nicu’s and Valentin’s apartments are continuously underlined by our mechanical guide, impossible for me not to tune in with my mates’ silent gloomy thoughts, maybe even stifled anger, but also – unexpectedly enough – a shared sense of human piety. At least this is my perception when we access the Ceaușescu couple’s bedroom. Here indeed everybody’s attention has been drawn to the bridal bed with its ingenuous (or ingenious?) set-up of Nicolae and Elena’s folded pajamas, each shown on its side of the bed (who informed the curators which side was whose?). In fact, considering all, the couple’s room appears essentially basic if elegantly furnished, “probably nothing near the posh layouts of today’s Romanian oligarchs’ villas”, starkly comment a middle-aged couple who has stopped to talk with me after the tour has finished.

The official name of the museum is The metamorphoses of a place of memory. First opened in  September 2013, it operates as a unit of Curtea Domneasca Museum Complex of Târgoviște. Located in the  former military unit at Târgoviște Railway Station, is the place where the Ceaușescu couple spent their last two days, stood trail and were executed by a firing squad on Christmas Day, 1989 at 2:45 p.m. According to statistics, foreigners more than locals have been visiting it, which is in line with my personal account: some of our local friends were quite surprised at the idea that we had chosen to visit “that place” instead of the Curtea Domneasca, considering that Târgoviște is one of the most historical cities in the country  and the capital of Wallachia between the early 15th century and the 16th century.

This time my visit is quite solitary, we are just my husband and I, and only after a while two other visitors (a cameraman and a photographer) happen to show up in the small museum. We have been asking directions  a couple of times in town, first to a photographer covering a social event in another public building, then to a cabman that condensed it all with a simple but effective phrase “Da, da, the place where boom! boom!” The guardian lady who sells us the tickets seems surprised to receive visitors on a rainy Sunday afternoon. It is unusually cold for being at the end of March, in fact our Catholic Easter Day. While observing the few rooms, the metal plates that Nicolae and Elena ate on, the beds where they slept, and the tiny improvised courtroom where they faced a hastily conducted trial before a special military tribunal, the place where they were fatally shot, I cannot help lingering on the infinite symmetries of chance: our visiting the place on an Easter Day, their being killed on a Christmas Day.  Also, with fresh memories of my recent visit to the Primaverii Palace, I find myself considering the abyss between that scene synonymous with power and glory and this scene, so soaked up in physical humidity as well as in a sense of human helplessness.

So it is that I definitely choose to leave aside any attempt at any historical debate (revolution or a coup d’état etc.) to just absorb the deep magnetism of a place which for someone, at a certain point in time, has represented the final tragic scene of their human parable.