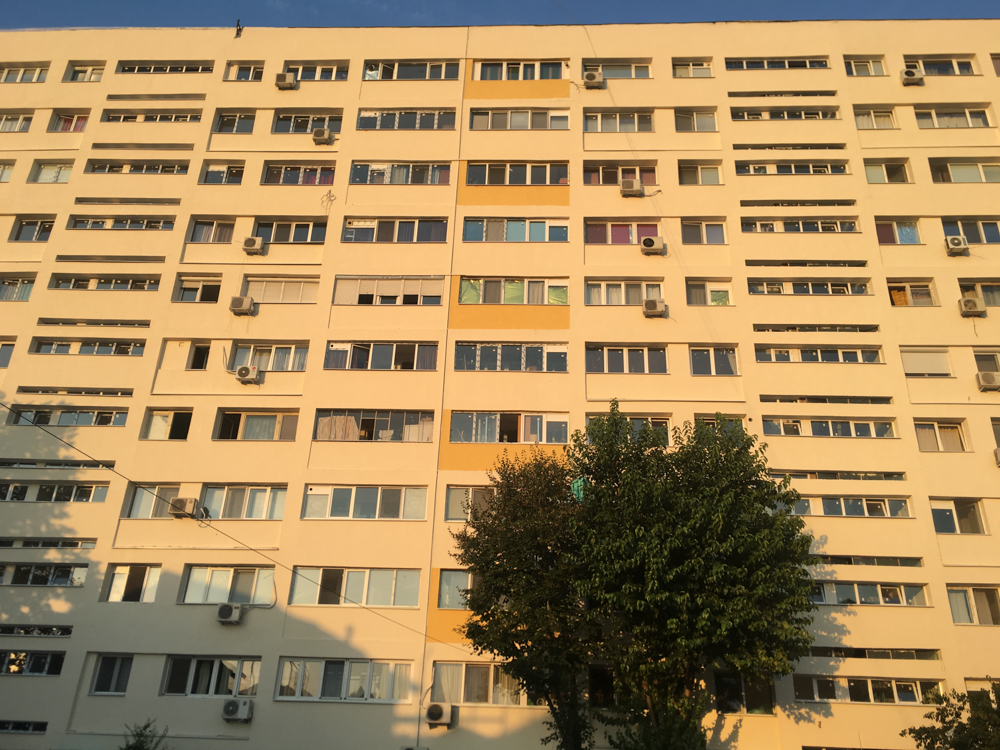 The View from the Tenth – Meeting Philip Ó Ceallaigh

“The world was full of monkeys that had learned lots of words. It was so easy to get words wrong. When words came out right, the right ones and the right amount, you didn’t notice the words so much as the effect they had. The magic essence departed from the substance, the music played.”

I met Philip Ó Ceallaigh in mid December at Senecanticafe, one of the varied co-working spaces  springing up in Bucharest.  Native of County Waterford, Ireland, Philip has lived in a number of countries and experienced a range of jobs before stopping in Bucharest and focussing on writing full time. In fact, the following conversation does not report on that first meeting but on a later written exchange, after I had completed reading his short stories in Notes from a Turkish Whorehouse (Penguin, 2006) and The Pleasant Light of Day (Penguin, 2009).

How much of the Philip living at the tenth floor of a Bucharest suburban block is still You today? Is there anything belonging to that period that you happen to miss now?

Now I live on the eighth floor, similar block, another part of town. So I don’t need to be nostagic.

Which were your reading back then? How crucial was and is poetry for you?

Then I was reading the writers who became important to me when I was first developing a style, seeing how experience could be rendered – Hemingway, Miller, Bukowski, Celine, Hamsun, Carver. I wrote poetry for a while and was very interested in how language could be heightened and focused, but when I took the lessons and brought them to prose I saw no reason to go back to poetry.

Your choice to deal with words,  searching ways to empower them, reaching back to their roots, while living at the tenth floor of a Bucharest block suggests the attitude of an ascetic monk. How much of this impression holds true?

Many fun-loving degenerates have lived on the tenth floor.

You have lived in Ireland, Spain, Russia, the United States, Kosovo and Georgia, then picked up Romania as your place for focusing on writing. Does Romania prove a convenient place for that kind of exercise?

I do think most of our existences consist of noise and agitation. With a little sense and detachment we tend to say less. Bucharest then is a nice big manifestation of the human condition – it’s particularly noisy and senseless, an accumulation of badly fitting parts, failed intentions, everybody rushing around with their desires and ambitions, colliding with each other, getting frustrated and angry and disspirited. I never planned to settle in Bucharest permanently, and I never planned to write about Bucharest. I have nothing to say about Romania in my fiction; it is not my chosen subject. But I do set my stories in a real physical space. I mean, as I write, as I imagine action, I generally see it taking place in streets I know, in apartments where I see the layout of the rooms. In this sense I’m very located in Bucharest. Notice I say Bucharest, not Romania. But it’s very much my Bucharest, the proccupations and sensibility are mine, I’m projecting my own sense of what life is on those specific pictures of life which I draw using the material I have before me.

Your cynicism reconnects to ancient roots: it literally explains your vagabond lifestyle. The effect on your readers is powerful, they trust your words and empathise with your quest. Any role a writer can play in our society today? Do you feel lonely or belonging to a community? Which?

I was very moved by Kerouac when I was still a teenager, and later I began to read about that community of writers that later became known as the Beat Generation, and I liked to imagine how it was with Ginsberg and Kerouac and Burroughs and others all in one room in New York, all young and curious and enthusiastic about their work and the idea of writing. How they were friends and helped each other and got drunk together. I like the idea of that kind of society between artists. But I’ve never felt that kind of thing in my own life. Never sought it, perhaps because I’ve never felt its attainability. I have a few friends who are writers, but we’re spread thin across the globe. I have two friends in Bucharest who are writers. One is well known, the other is not and has never shown anybody what he writes. I have very little sense of my role as a writer. What attention other people will pay to what I write or what sense they make of it seems accidental to me, outside my control. I just make the stuff.

The view from the tenth floor also triggers considerations on the power of money or, alternatively, on the effects of its lack. In fact, how much can we actually afford not to care about money?

Money is like sex. When you don’t have any, or are excluded from getting any, it is a dominating anxiety. Money has its own eros. More so in society like Romania, where there is a desperate insecurity about social standing that has everyone trying to stomp on everyone else. It infects me more the longer I stay here. I’d like to say it affects me, but it’s uglier than that. It infects me. Because if your common, public space never provides you with enjoyment and security you feel compelled to secure these things privately, so you can have control over your life.

Your stories generally feature solitary men with women playing marginal or sometimes literally instrumental roles. Are you also interested in writing about female characters or you consider them like novels, i.e. not your bread?

It’s not male or female characters that interest me in their maleness or femaleness. It’s the interaction between them. And that interests me very much.

Sex is a recurring element in your stories and often described as a tricky language: temporarily healing but complicating things in the long run. Many of your characters – who are mostly male – seem to experience that dissatisfaction. Is that all or would you add something on the subject?

We are combined of the animal and the rational, as that Greek guy pointed out a long time ago. So life will continue to be tricky. Woof-woof. Or as the dogs say in Romanian, ham-ham.

You are a keen observer of Western societies, especially so in The Pleasant Light of Day. You observe issues and hypocrisies and don’t fail to describe how creepy Western imported models have provoked extra damages to social peace and stability here in Romania. How much longer do you think it will take for the Romanian society to get rid of corruption ?

I can’t tell. I couldn’t have predicted the things that happened in 2016. We were all very optimistic at the end of the 20th century. I don’t know that things are falling apart, but they seem to be fraying at the edges. We can’t take anything for granted, least of all the idea that Romania will become a less corrupt country. Romania was corrupt even before the communist period. But younger Romanians are certainly less scared, less passive, less sneaky than the generation that came before. The people born in 1990 are very different to those born in 1960. They’ve seen another world.

Accelerating new technologies, social networking, globalised consumer models, all seem to produce growing unhappiness and frustration. We grow more and more passive users, to the point that our mindsets follow standard patterns instead of actively searching our own ways. Are we still in time to steer clear of all this and free ourselves from those invisible chains?

I do what I can do. I see most of the people on the metro are playing electronic games on their phones. There are a few people reading books. What we need is everybody with a smartphone and everybody on medication for depression, anxiety, general sadness and apathy. Then we won’t need stories or novels. Just better designed computer simulated realities. And then the barbarians will come over the border – people with real lives and appetites, who make babies by accident due to real fornication – and we’ll start anew. They’ll sing songs as they roast pigs – or us – over their fires. Somebody later will come along and make lyric poetry from these lusty songs. And so it goes, art will be saved.

Both Notes from a Turkish Whorehouse (2006) and The Pleasant Light of Day (2009) were contemporarily available in their Romanian translation, whereas on last October Racconti Edizioni translated into Italian Appunti da un bordello turco (2016). Reception of your books has proved enthusiastic, you also won prestigious prizes. What kind of feedback do you receive from common readers? Can you detect any major difference in the reception of your work among English, Romanian or Italian readers or, on the contrary, any recurring pattern?

Romanians tended to see my work as descriptive of a social reality, journalistic. English speakers as imaginative, exaggerated, fantastic. I’m talking mostly now about the first book, Notes from a Turkish Whorehouse. Irish reviewers tended to be troubled by the immorality, misogyny of some of the characters, and by extension the cynicism of the author. Ireland is the only place where I’ve had really bad reviews. As someone who doesn’t have a clear idea of who my reader is, I’ve been pleased by the reception of the book in Italy. Firstly I’ve had a lot of luck in that the publisher is a publisher only of short stories, so the work is targeted at those who appreciate the form. Not having an idea who I’m writing for, I just imagine I’m writing for human beings, and that the stories work as stories no matter where you are from, and that they’ll still be stories years from now.

Your attraction for the past leads to a kind of continuum between your fiction and non-fiction work. You wrote long compelling essays on whole disappeared Bucharest quarters, particularly about the Jewish area in Unirii. Which are your current fields of study, amid fiction, non-fiction and narrative journalism, where do you feel more drawn at the moment?

I’m interested in history, or rather how the past is erased and replaced with fictional versions of the past. You would think a reckoning of the past is what is most needed in a society that has experienced genocide and totalitarianism and destructive nationalism – but these traumas make the reckoning even. Each generation moves forward in a fog of forgetfulness and denial. I’ve just finished writing a book in which I use the lives and the writings of a number of authors of fiction in eastern Europe to try to evoke this lost, buried past. In the case of Romania, I focus on Mihail Sebastian, who I’ve also translated into English –  For Two Thousand Years was published in English in 2016. I don’t know when my own book will be published. It might not be.