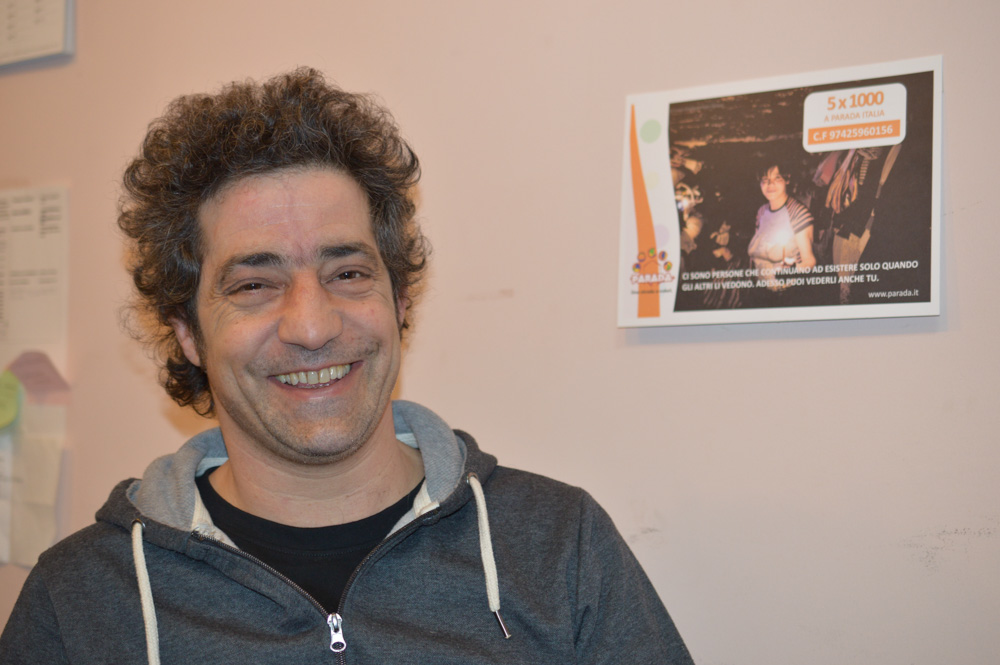 Franco Aloisio arrived in Bucharest at the beginning of the 2000s, he was supposed to stay just for four months as an external advisor for an NGO.  Fundatia Parada had been founded in 1996  by Miloud Oukili, a French-Algerian clown engaged in rescuing street children with the help of circus arts. Things went on differently and Franco wound up settling down in Bucharest and taking over from his friend Miloud the guidance of Parada . Today not only is Aloisio President of Fundatia Parada and  Serviciul Apel – another NGO helping marginalized youth to access the work market -, but also sits as chairman of CIAO,  the umbrella organization reuniting the thousands of Italian NGOs operating all over Romania.

How many and who are the children and the young population still living in the streets of Bucharest?

Talking about figures, compared to ten years ago, their number has considerably decreased: from about 5,000 at the beginning of the 2000s they have shrunk to some 1,200. Yet they are still too many. At the beginnings of the 2000s you could breath enthusiasm and a new air of opportunity in Bucharest. That optimism faded when Romania entered into Europe in 2006: the focus shifted on economic targets while the social issues seemed to be under control. In fact, the 2008 world crisis took us all unprepared and new social conflicts emerged. The restrictive measures taken by the Emil Bloc governments – public salaries  cut by 25% and  TVA increased up to 24% – caused many vulnerable families to shift below the poverty line and get some of them to become homeless. So they got to share the destiny of the first generation of street children who by then had become parents of a second generation of street children. All along, other children and adolescents have been arriving to Bucharest from the poorest provinces of the country, escaped from difficult family situations or from local orphanages, undetected by social protection filters.

Can you sketch an identikit for these kids?

They usually come from very poor family background. When I say poor I do not necessarily mean economically. More often it is a poverty in human relations where alcoholism, physical violence, forms of abuse are involved. Surely enough, economic poverty cannot but throw oil on the fire.

How much of the street children phenomenon can be seen as a consequence of Ceausescu’s demographic policy?

Almost zero connection to that. The problem erupted in the aftermath of December ’89. The collapse of the communist society provoked a total disorientation in the established social order while all the 90s were characterized by a general power vacuum and total incapacity if not disinterest in tackling the insurgent problem. In Ceausescu’s time street children simply could not exist, if only for a matter of social control. Children from poor families were grown in state institutions, if according to selective criteria.

At that time there existed different types of orphanages.  Surely enough, children with handicap and physical problems were marginalized, the consequence of which are still detectable today. Nevertheless, we cannot blame Ceausescu for the recent scandals involving orphanages and lager-style public institutions maltreating children as of 2016: rather, that is an alibi covering a deeper mentality issue still affecting today’s society. The same applies for the AIDS spreading phenomenon:  today we cannot blame Ceausescu for that, as HIV-positives are mostly less than 26-year-old. In general terms, Ceausescu is still often blamed in a way to raise any responsibility from the current political system.

What is affecting these children’s lives most now, compared to ten years ago?

Indifference is what affects them most now. The alarming aspect is that now in Romania street children are no longer perceived as a social emergency at all. To the point that many people consider it a problem belonging to the past. More likely, over the last twenty-six  years people have got used to these children’s ghostly presence. They are seen sniffing their aurolac from plastic bags at the exit of certain metro stations, kind of accepted as part of the urban landscape: which makes them invisible. As it were, a collective suppression has been underway, exempting the Romanian society from any liability along the whole responsibility chain: from the police to the city administrators, from the health system to the social assistance, the school system and – last but not least -, the private citizens. The reason is quite plain: reckoning the existence of a street children issue would destabilize the whole social system and force the collective conscience to think better. Because, as Miloud used to say, “street children do not exist, only children forgotten in the streets by adults. And we are those adults.”

What is the role of NGOs in facing the problem today?

The sad thing is that the street children issue neither seems to appeal to Corporate Social Responsibility projects – all the less so in the case of Romanian companies. The reason, as we pointed out, is that by reckoning their existence, they should also recognize that the social body is sick and needing some radical change. Completely different, say, is the case of handicapped children, for whose unfortunate conditions only fate is to be blamed for. Cynically enough, they can make quite a strong emotional impact on public opinion, without involving any social self criticism.

As a result, at present only three NGOs are actively working to provide street support in Bucharest: Samu Social, mainly focussed in assisting homeless, alcoholics and adults with mental problems, ARAS (Asociatia Romana AntiSIDA) providing assistance to HIV-positives and us, Fundatia Parada, taking care of street children and at-risk youth.

Another alarming aspect is the massive impact drug addiction is having on the youngest ones living in the streets today. Starting from 2005-2007, we have been registering an impressive growth in hard drugs consume. By now almost half the street children population is drug-addicted and HIV and hepatitis positives. The wider picture, according to the official data from the National Antidrug Agency and Ministry of Health, shows that drug-addict in Bucharest are 20,000, many more than just street people.

How is the welfare system in Romania coping with all this?

In theory, the Romanian welfare system is enforced and shaped according to the very same set of rules applying in any other European State, in practice it is still quite behind. Apart from budget cuts which have been affecting the third sector in every other European State, what is lacking here which could make a difference, is the social pressure coming from an active civil society. As it is now, authorities are never much urged to take effective action and just get along.

At a closer look though, the Romanian welfare system faces two other major problems: very low salaries and lack of a networking system. Like in all the public sector – but all the more so here – welfare sector employees are paid extremely low salaries, no matter their educational level and professional skills. A brilliant post-graduate and specialized operator may earn about 1,100 RON (280 USD, Ed.) per month, which is disqualifying and causing a serious drain towards more profitable jobs, often letting the less capable and motivated cover key roles in important offices. Also, the lack of a networking approach makes the whole scene very patchy, with effective performances reached only on a case by case basis.

In 2016 Romanians are having both local elections in springtime and general elections in November, would you expect any major change may come along with that?

The revolution people had been dreaming since the collapse of the Ceausescu’s regime, is late in taking a real shape as steps to be taken are still too many. In fact, by now  a sense of disillusion for a real change has been prevailing in the Romanian society. The recent street protests following the tragic incident at the Collective night club in Bucharest on last November took to the streets thousands of people, actually proving the biggest street protest in Romania since the 1989 Revolution. Yet, it is difficult to understand the final direction such a large social movement may take, containing as it does a whole range of different protesters. Surely enough, most of them belong to the young educated middle class working in international companies, tired to be oppressed by an incompetent and corrupt political social class.

For sure, the current political system is no longer sustainable and most probably also the large and very active diaspora will have a say on this.

Going back to Parada, what form of collaboration do you have with the public institutions?

We are officially accredited like any NGO operating on the territory. In order to work you need a legal recognition – all the more so for a charity like us, where you may happen to press charge on behalf of our beneficiaries. As for financial aspects, we rely only on our own means.

Also, in order to access European funds – which represent one of our main financing tools – you need to be accredited to the competent sector. In more general terms, our relation with the public institutions depends mostly on individual relations.

What about Parada’s relation with Public Order and the Police?

It is a bivalent approach, which often makes each other stand on two naturally opposite sides. People living on the street may happen to infringe the law. We tend to protect our beneficiaries because we have a wider picture of their personal situation and what may appear as punishable act maybe the result of a deeper discomfort. Actually we are particularly careful when our boys and girls are blamed for faults and crimes which they did not actually commit, as it quite often happens that the become the easiest scapegoats. Or, by effect of the very penal code.  The alternative sentences foreseen by the Romanian Penal Code, like probation cannot be granted if you live in the street: maximum penalty must apply! And unfortunately, it is a vicious circle… In fact, the Police cannot but be tolerant: in Romania discomfort areas are still so large that the public order cannot but widen the net of justice, like it happens with the abusive use of the electric power.

What are Parada most urgent needs?

Like for any other NGO, fundraising is our main concern, as over the last few years the whole sector has suffered major cuts. Most of the money comes from projects (with Unicef, Global Fund, European Union, etc.), then CSR, artistic activities – which are our best communication tool – donation campaigns like 5×1000 in Italy, and 2% in Romania, where private citizens can chose to donate a fixed percentage on their annual taxes to a non profit organization. In Romania this is still a relatively  new tool which needs to reach out: another crucial battle for the Romanian civil society to fight in the near future.

Anything to say to our readers?

If you are in Bucharest, come to visit us: you would be most welcome. You can also join a Bucharest tour in English with Sergiu, one of our former beneficiaries now working in partnership with Interesting Times Bureau, a project developed by a non-profit organisation promoting urban arts, local history and businesses. Sergiu will be eager to take you around to make you understand more about the city and its parallel worlds. Careful though, he won’t propose you a “poverty tour”, rather he will be glad to share with you his life story, an experience which can be mutually enriching. His tour also includes a visit to our Daily Centre in Strada Bucur. A tour against indifference, in a way ;).

Watch a tv interview in Romanian to Franco Aloisio

Read Got a Cigarette? A true story by Sergio Dalla Ca’ di Dio